In preliminary treatment, foreign objects and trash are screened out of the wastewater. The screened wastewater flows to aerated grit tanks where small, abrasive particles such as eggshells and coffee grounds are collected and sent to a landfill.

The wastewater then flows to large settling basins where the flow is slowed to allow the liquids and solids to separate. During this primary treatment process, heavy solids sink while lighter materials, scum and grease, float to the top. The settled solids, called primary sludge, are removed and sent for further treatment. The primary treated wastewater is sent to secondary treatment for additional processing.

In secondary treatment, the wastewater flows into aeration basins, where bacteria are utilizedto consume the organic contaminants remaining in the primary treated wastewater. As the microbes consume the dissolved organic materials, air is bubbled through the wastewater to provide oxygen. The microorganisms are separated out of the wastewater in the final settling basins while small percentages are returned to the aeration basins to sustain the process. The sludge generated here is sent for further processing. The clear effluent is either discharged to the ocean or reclaimed.

All of the sludge that is removed from the wastewater is pumped into anaerobic digesters. The bacteria in the digesters reduce the amount of solids, odors and pathogens. Methane gas, a byproduct, is then in turn used to heat the digesters. The remaining solids are dewatered to a cake of approximately 20 percent solids.

After primary and secondary treatment, the treated wastewater is either sent for additional treatment for use as recycled water or is discharged into the ocean outfall.

During the water recycling treatment process, treated wastewater is sent through a separate, highly specialized tertiary filter system where it is allowed to trickle through layers of sand, which remove the very small particles remaining in the wastewater. When the water leaves the filters, more than 99% of the contaminants have been removed. This filtered water is then disinfected with chlorine. The chlorine is necessary to kill any remaining disease-causing viruses and bacteria. The resulting water looks very much like drinking water and is sent out into the reclaimed water distribution system. 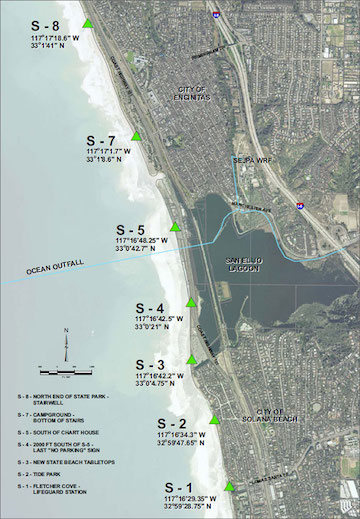 "Protecting the Environment and Public Health is our Mission"

To serve our communities by providing safe and reliable recycled water and wastewater services in order to protect the environment and public health.

We pursue innovative practices to produce clean water in an environmentally, socially, and fiscally responsible manner.

Meet the SEJPA Board
Agendas & Minutes